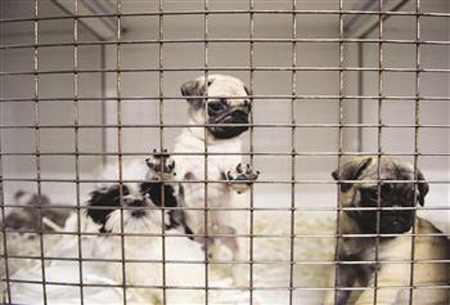 The Food, Agriculture and Livestock Ministry has revised the current law to protect animals subjected to cruel treatment in pet shops, Minister Mehmet Mehdi Eker has said, adding that tighter inspections would follow.

The new measures specifically dictate the size of the space where the animals can be kept, and the ministry is set to conduct tighter inspections to enforce these regulations, according to Eker.

“We introduced a measure, for instance, for a dog weighing 20 kilograms to be kept in an area of at least four meters square,” he said.

Meanwhile, İsmail Ayarslan, the owner of a pet shop called “Minik Dostlar,” said he stopped selling cats and dogs about three months ago.

Ayarslan and some friends are running a campaign through the social media site Facebook to bring together animal enthusiasts who want to have a pet and the ones who want to give one away.

The Facebook page “Beni Sahiplen” (Adopt me) currently has more than 2,500 followers. “We saw that the animals in the cage were suffering from psychological problems such as behavioral disorders. They were under extreme stress. Now we are only selling fish and birds,” Ayarslan said. The new regulations were aimed at preventing the mistreatment of animals, as well as averting cruelty during animal slaughter, the minister said, adding that they had also prepared emergency action plans to be used in the event of an epidemic.

Recently amended legal provisions already prohibited keeping animals in small cages, but such regulations were hardly ever implemented, Eker said. “The writing on the product labels was unintelligible. We decided now they should be written in 12-point font. People who use pesticides without a certificate will be subjected to a monetary fine of between 2,000 and 5,000 Turkish Liras.”

Domestic animals in Turkey are brought mainly from Russia, Ukraine and Romania off the back of a truck, said lawyer Ahmet Kemal Şenpolat, the board chairman of the Animals’ Rights Federation in Turkey (Hay-Tap).
“We have been trying to convince society [in favor of adopting] these kind of legal amendments for the last six years. We initiated campaigns and demonstrations to create awareness regarding the cruel conditions [that exist] in pet shops,” Şenpolat said.

Hay-Tap has recommended the closure of all pet shops and the prohibition of bringing animals into Turkey from abroad.