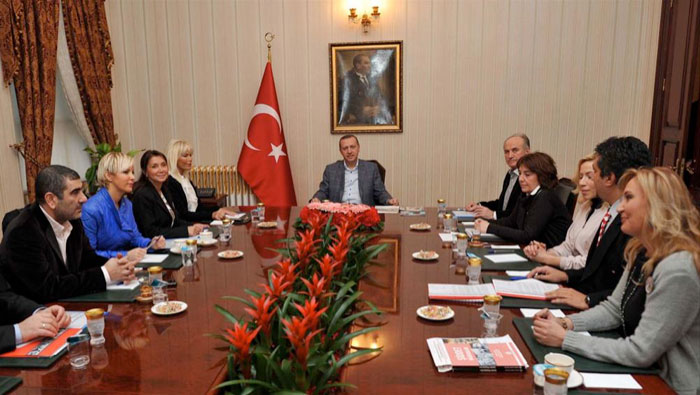 A meeting between animal rights activists, the Istanbul mayor and the Turkish prime minister brings to the table a variety of animal-related issues from shelters to dolphin aquariums. Activists say Prime Minister Recep Tayyip Erdoğan has pledged to change and strengthen the current law on animal abuse after the upcoming general elections in June

Animal rights activists have met with the prime minister to urge the government to implement serious punishments for animal abusers, Anatolia news agency has reported.

A group led by Animal Rights Federation, or HAYTAP, head Ahmet Kemal Şenpolat asked Prime Minister Recep Tayyip Erdoğan to institute an aggravated punishment for animal abuse by recommending those who are convicted of animal abuse not be permitted to obtain their own release by paying an administrative fee.

Şenpolat met Istanbul Mayor Kadir Topbaş at the Prime Ministry office at Dolmabahçe Palace on Sunday before the meeting while the pair was accompanied by a delegation of eminent figures from across Turkish society, including pop singers Yonca Evcimik, Ajda Pekkan, Metin Özülkü and Burcu Güneş, journalist Ömür Gedik and actress Tuna Arman.

The activists said persons accused of animal abuse should face trial in court.

Şenpolat said the prime minister told the delegation he was very sensitive about the issue. He cautioned, however, that it would not be possible to change the current law outlining punishments for animal abuse until after this summer’s general elections, according to Şenpolat.

“We received a promise from the prime minister,” said Şenpolat, adding that after the elections, any cases regarding animal abuse would be judged in the courts.

Şenpolat said there were some websites which broadcast animal fights and provided site visitors the opportunity to bet on the outcome of the fight for money.

“We also demanded a change to the current Internet Law [to protect animals from being exploited in fights],” he said.

Hürriyet columnist Gedik said animal shelters were also discussed during the meeting and added that the metropolitan mayor promised that shelter employees at Istanbul shelters would be better trained to handle animals in their care.

Evcimik, a pop singer, said she was surprised that Erdoğan had an interest in animals.

The singer said she was impressed by Erdoğan’s stance on the issue of animal welfare and said she believed the prime minister would consider the subject seriously.

Pekkan and Özülkü also said they were impressed by how seriously the prime minister took the issue.

“When Erdoğan was speaking with us about animals he quoted from both the Prophet Muhammad and Mevlana [Jalaluddin Rumi],” Güneş said.

“His son also has a dog,” Güneş said, adding that it was important to share Erdoğan’s thoughts on animals with the public.

Actress Arman said she believed Erdoğan’s remarks that he would take measures to increase restrictions on animal abuse.

Arman demonstrated in a sit-in protest on Istanbul’s İstiklal Avenue last year, collecting signatures from passersby to demand that animal abuse be reclassified as a criminal offense rather than a misdemeanor.