(*) I Clicked, I Clacked, And Thus I Protected Animal Rights! 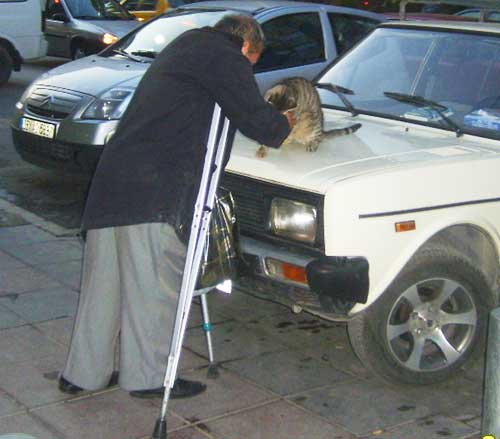 Unfortunately, hundreds of thousands of animals on the world are slaughtered every day by humans, mostly through heaviest suffering. Since they are treated as lesser souls and they do not have media through which they can publish their anguish nor they have activists to protect their rights, less than 1/1000 of their suffering can get through to us.

Since animal rights activists are mostly disorganized and uncoordinated, such violations cannot be properly made into laws that prevent them happening again.

Most of the animal lovers who are aware of the situation just let their anguish out through cursing, damning or plainly swearing, thus simply choose to EXPRESS THEIR DESPERATION.

As we always said, disorganized and uncoordinated, day-by-day efforts serve to only drain peoples’ energy and cause all the long-term struggle to go to waste just by a momentary decision of street-smart human species.

One of such short-term efforts that recently became widespread are the virtual petition campaigns, which meant protesting through Internet. For instance, if someone killed whales in Japan, just slap together a virtual petition which includes clicking on YES button and entering some text to convey the message.

Or if some dogs are slaughtered in Ankara, create another virtual petition site on the Internet, announce the site, have everyone click and clack on the appropriate spots so that this slaughter be protested as well and let everyone clear their conscience with a feeling of having their duty performed.

Honestly, how logical does it sound to you? Which slaughterer gets so impressed by a web site that he or she says Wow, 70,000 clicks protesting what I did; I better stop doing it?

Worse, such Click and Clack petitioning causes animal lovers to switch to a state of complacency by giving them a false sense of relief of having a duty done, which I personally failed to grasp so far.

The only valid communication method with the state is the physical and written means. In order to create a pressure one has to get an appointment for a face-to-face meeting, express the trouble and wishes in writing consciously, clearly, scientifically and if possible by referring to laws and regulations, and then negotiate.

A virtual environment that only you and your peers know is most likely a place where you browse when you’re in the office. That is, that world virtually exists but has nothing to do with the reality. Actually, if these virtual petitions on the Internet were of any use, most problems including human rights, environmental rights, women’s rights could have been resolved by now. For this reason, people who are physically involved with animals in shelters or in the streets do not understand this Internet world and rightfully show a strong reaction against it.

If we cannot reach the higher positions of the state or those of the organizations for which slaughterers work through public relations, lobbying, applying pressure on political parties or universities, education, panels, seminars, picketing, TV programs and brochures, which is a much harder way, or we prefer not to use these means because it’s much harder, then believe you me that by this clicking and clacking and virtual petitioning we will only be doing PROPAGANDA among ourselves and nothing more.

In short, we will be proving the Turkish proverb The hare was mad at the mountain but the mountain was unaware of it with each click, thousands of times.

[Translator’s note: I personally believe that the popularity of virtual petitioning in Turkey has a lot to do with the attitude of somebody do something but I can’t be bothered more than this, which showed tremendous increase in recent years.]

Of course, hundreds of alternative means to create pressure on aforementioned organizations and vicious people can be exemplified. However, unless these have been performed in a systematic and organized manner, hundreds of thousands of animals will continue to suffer.

Do you think minimizing seal slaughtering in Canada has been accomplished through clicking and clacking? Canadian government down to its individual representatives and ministers has been pressurized by organizations and national assemblies throughout the world sending a hail of official protests; hence the partial improvement. Even Canadian citizens were rallied by environmental organizations against their government to stop this senseless savagery.

Spain may put a ban on bullfighting not because of virtual petitioning. Because of official letters of protest and fear of reduced tourism revenues through boycotting, it is on the verge of stepping back.

If it had been this easy, fight for rights, which is a rather new event in the world history could have been resolved fast. Internet can only be effective only when a serious and respectable news site keeps posting articles on this issue continuously, and only to a certain degree. There are hundreds of thousands of people who are not part of that world since they do not simply turn on the monitor.

In summary, unless you are a day-by-day activist and you can take more realistic steps to realize your ideas, you’re in for it till the end.

Otherwise, you continue to be one of the hundreds of thousands of people who keep worrying, suffering and spreading unhappiness around yet folding their arms and doing nothing to pay what we owe to our animal friends.