The declaration of PETA dated May 3rd, 2009 relating to putting to sleep (killing) the unattended animal is unacceptable to our federation.

Even if the point of view of PETA, founded in the USA is based on the animal welfare, there are nearly ten thousand animal production farms in the USA actually and nearly 10 million healthy, possessed, not having any problems are being killed annually in the name of putting to sleep. 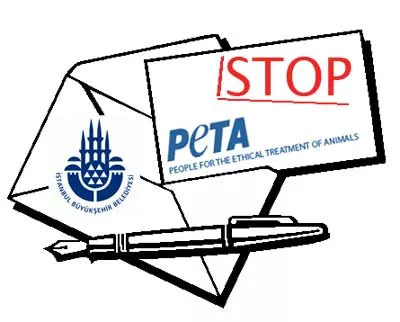 But nonetheless, the one who provides that this struggle aims to prevent the production these animals and who makes them a commodity of the capitalist system is once again these countries. Our country is neither EU, nor USA..! Their climatic conditions, life styles, and animal perceptions are not similar to Turkey.
Our country is not comparable to countries such as Germany, Netherlands, Canada, of which their culture and people are different; but to Mediterranean countries which are Italy, Greece, Spain and even to the Latin American countries such as Brazil and Argentina, who cohabit with their animal in their streets. We have to admit that we are afraid that laws and applications like this which are of Occident- origin and which are unacceptable to us may serve as an example to local administrations who does already not want to budget to animal maintenance.Neither our federation, nor many non-governmental organizations (NGOs) active in Turkey, can consider this kind of approaches as correct, just because they are Occidental, even if it is PETA which is in question. Moreover, PETA is in obvious contradiction with itself, considering their anti-fur campaigns and this declaration. If the animals are in a bad conditions and unattended, this is not their fault, but the fault of local administrations which shirk their essential duties and cannot find right solutions by co-operating with the right NGOs. Today, the conditions of both eventide homes and children protection institutions are miserable in Turkey. And this situation is documented from time to time by the media. If this mentality is inoculated to our society, the end of the old people and the children living in these institutions will be emanated by the local administrations not fulfilling their essential duties. Even if you’re named PETA, it is beneath you to make a show of strength to someone which is weaker than you. PETA is ultimately a non-governmental organization of a system, so this is an unfortunate statement. One would wish that PETA would give this kind of a statement against production farms, pet shops, groups and lobbies providing unearned incomes over animals.There are many institutions which does not like the actions and discourses of PETA around the world.  Not fulfilling the duties towards animals just because the duties towards people are not fulfilled and encouraging to kill them is another sign of perversion.
Our struggle in Turkey is for that the Anatolian mercy gains the upper hand against this kind of approaches. That‘s why the three-legged, disabled, deserted, abandoned animals are still alive ib our pet shelters.
ADMINISTRATIVE BOARD OF