(*) Turning Off The Tap by Closing The Valve ! 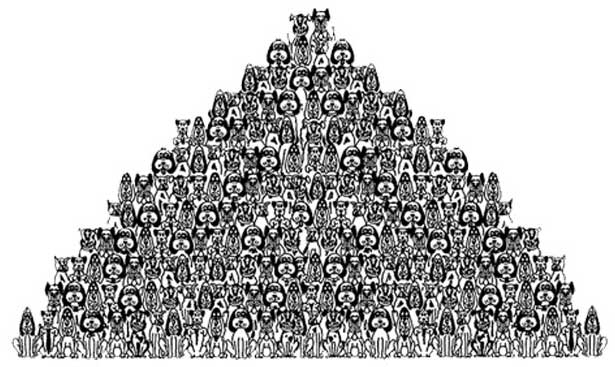 If you please, let’s start the topic by giving a striking example:

Do you know how many dogs are born from a pair of unneutered dogs if you don’t have any control on them? The answer is 5,000 - as much as a little town’s population. Because they know it, they still continue to poison them, or wait them to die in agony at the jail-like pounds into which they were jammed. Are the animals guilty for the increase in their population this way, or does the guilt belong to us who don’t fulfill our duties, kill them and try to make the external world forget about this? If mass poisoning or murdering in the center of the cities was a solution, wouldn’t we have been successful up to now? Is there any municipality that hasn’t brutally killed animals so far?

You don’t even know that when you start killing, instead of 4-5 they can give birth to 10-12 babies anyway to protect its species by nature’s law. In other words, whether you kill or torture them or send them abroad or jam into a pound or dump them in the islands just like our wicked ancestors did, you are incapable of solving the problem.

By the way, should I make a sincere confession to you? Please raise the number from 5,000 to 60,000. 60,000 poor animals in 6 years…on the streets, at the dog pounds, in the traffic accidents…under the poisonous injectors of murder crews…Even neutering cannot cope with this many numbers…in terms of both the costs and the labor…Once more, I want to stress the awfulness of the number that we reached as a result of failing to neuter only two cats or dogs: precisely 60,000! I mean water is streaming down the roof of our house, but we are trying to clean the floor - by murdering, cramming into the pounds, or evacuating from apartments by court decision. Streaming of water is allowed, but there remains no brutality
that we haven’t employed in order to clean the water on the floor!

Our goal is not to upset, complain, or use each other like a wailing wall. We also intend to offer the solution. Let’s keep reading then.

Although the puppies that are smuggled (imported) are sold for $500-$2000, they become a stray dog after a while as a result of the fast reproduction. These lives, which cost $20-$30 on average, are turned into commodities of a large market thanks to the penniless tourists who bring them from the old eastern bloc countries. Poor puppies are smuggled through the borders in airless circumstances, suitcases, and nylon bags, and when they come to the pet-shops, they can immediately find a buyer with the help of their cuteness. The ones that could not are in the streets anyway…and the same fate waits for the ones that are sold. Then you see a St. Bernard dog that is supposed to live in the Swiss Alps turns out to be a street dog in Marmaris. Why? The owner could not handle looking after it. When it was a baby, he satisfied his desires. Then he got bored. He deceived himself saying that it had hair and litter problem, his neighbors did not want, his children could not take care of it, and abandoned it at the door of a shelter or in a warm climate so that it can feed on garbage.

On the other hand, many shelters in Turkey have become official death camps. Don’t we officially pave the way for killing - by keeping them in these places, not allowing volunteers to get in and changing the numbers inside every week?

The number of shelters in Istanbulonly has increased to 40. Despite knowing all these, which conscious person can continue his daily life with his eyes closed as if nothing happened?  They don’t think about what this dog is going to do afterwards. Then voila! Thousands of “pedigree street dogs” ready to be killed…tortured…a reason for the spread of diseases like rabies…moreover a threat to human health.

Besides, you cannot transport abroad whichever dog you want, so think about the harm given by officials, who for the sake of a few dollars bribe made this trade come to this level, to human health because of the diseases such as rabies - let alone animal killings. I mean, look at the market that has been created because the eyes were closed at the customs. The state’s loss from tax is on one hand, illegal importing seems as it were encouraged thanks to the aforementioned carriers. By means of these lives that they are allowed to breed and sell, these ladies’ 1 week long vacations come for free.

Though there are many shelters, pet-shops in Eminönü, Surdibi and big shopping centers invite this business anyhow; whereas the officials that accept the complaints on the issue do not inspect them saying, “No way can we deal with dogs in such a hot weather!” Maybe in the future his own child will be bitten by a street dog and catch rabies, but don’t ever expect this consciousness from him.

On the one hand sell, on the other hand abandon or poison. Make every kind of money on the poor animals in this merciless system, and put the blame on them in any minor incident. This cycle has become an industry, and there appear many merchants (!) earning significant amounts of money through it. Do you think there is any difference between this, and the ones who kill thousands of seals, murder the whales and kill animals for their furs?

There is no sense in neutering alone without having the support of the society, public relations activities, and ensuring the cooperation of the state and non-governmental organizations, because the state unblinkingly kills neutered and ringed animals, too. Then you think it is better not to neuter them. Therefore, without having public support, cooperating with other NGOs, and involving educational activities, our efforts will only result in waste of labor, money and energy.

Beside all these hidden problems, the matter will not be solved with the shelters that have become death and torture camps, either. Due to the illicit import traffic, the tap is flowing down, but we’re still trying to clean the floor. Whom can we tell that instead of devoting our all energy to turn off the valve, we are losing time and energy by correcting the unconscious mistakes of people who call themselves “animal lover” but give harm to animals more than an ordinary citizen does?

Within the small and simple struggles special to human-being, we don’t even want to see the tip of the iceberg. Our “dears” cannot speak, in any case. Who can they complain to whom? 10/06/2009