Is it a Contradiction to Run Campaigns such as Painless Slaughter, Meatless Monday simultaneously with campaigns to become Vegetarian /Vegan ? 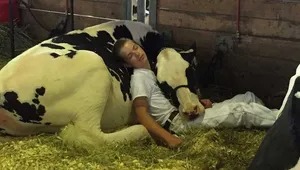 It is not a contradiction that these campaigns are carried out simultaneously within the same NGO.   Because NGOs should not lead to already known rules, rituals, studies, different ideas, and campaigns that we are used to. But lead to the new ideas  and different  ways of campagins and ides of opening minds . Otherwise, we will not be able to open up anyone's horizons and engage in encouraging works for the sake of giving a message to our own audience and we will always waste time.

I can explain the situation more clearly in the table below:

Lets assume that , Group 4 found on the right of the table are those who work at the physical end of meat production, i.e. butchers, slaughterhouse workers, barbecuers and also those who enjoy meat and dairy and are not prepared to stop eating these animal products.

Group 4 covers the majority of people and represents billions of people around the world, or millions in just Turkey. They are meat and dairy consumers, slaughterhouse workers, animal agriculture industry people like animal transporters, traders and animal farmers but also the average housewife or househousband, the average business man, the average athlete, the average student, the average construction workers, the average lawyer. They may underestimate the power of vegan/vegetarian groups, or they may mock them or they may have never heard of a plant based way of living. To be realistic, it is very unlikely that these people will go into the vegan group 1 anytime soon. It is however realistic for someone in column 4 to move to column 3.

I am not talking about the exceptions of course. Anybody belongs to group 4 may pass to the group 3  which is left of the group 4.  However it is unrealistic to expect him to jump group 1 at once. It is of course probable but too difficult lets say.

In the group 3, there are those who eat meat and dairy even though they know how these products end up on their table. However, many think that animals should at least be treated humanely before we use them for food. They do not disagree with the consumption of animal products, but they want suffering to be kept low. For example, they are not against eating eggs but they do not want  hens to live in tiny battery cages. In other words, these people in  column  3 are more compassionate and already showing that they care comparing to group 4. The group 3 , cannot tolerate any mistreatment to animals eventhough they consume meat comparing to group 4.

Nevertheless, at this stage, it is highly unlikely that group 4 will convert to group 1 (vegans), on the far left in the table above.

Why?  Because they likely like eating animal products and are morally comfortable doing so but also because it is easy, they are used to it, they don’t have time to do much more, veganism is not their priority, they are busy, too poor, too tired.  They want to eat animals but they don’t want animals to suffer. They are willing to promote changes within the industry and even adapt some of their eating practices, but not dropmeat and dairy from their plate. The group 3 members prefer stunning cut of animals as being have a mercy . I consider that this group of people can pass into the neighbouring group in column 2 or even 1 over time. In other words,  over time, this group of people, that have already started to question the ethics of how animals are treated in the industrializated agricultural industry, will realize innocent animals are killed with painless slaughter too and that often things still go wrong on “humanely labelled” farms, during transport and during slaughter.

Many of these people eventually stop eating certain products known to be the most cruel, like white veal, fattened goose liver or kosher and halal meat from non-stunned animals. These people, who never want to be in group 4, are more likely to evolve forward towards group 2 and possibly even 1 later on. Their chance is higher.

Group 2 includes vegetarians and pescatarians. As you can guess, this group of people neither want to be in radical group 4, but they also do not want to be in group 1, giving up all animal products. They do not eat animal meat but continue to eat dairy and eggs, sometimes even fish. However, they consider that the people in the section of painless slaughter (column No.3) can progress to their side  as well. In other words, although the chance of winning the person in the column No.4 is difficult, they know that the people in column No.3 will become vegetarian/pescatarian with time. At least, those who defend the painless cut, even those who advocate for meatless Mondays, and those who promote cage-free eggs, have a much higher chance of becoming pescatarian and vegetarian in the medium and long-term. They are already on the path to awareness and compassionate eating.

Group 1 consists only of vegans. In other words, they do not eat or wear animals or consume any products from them. As you can imagine, it is not impossible for people in groups 3 or 4 to pass here, but it is very difficult. Tell those people in group 4 about animal rights, show them videos of how animals are slaughtered, call out to them to go vegan and protest on the streets with posters and banners showing the horrors, but they still don't stop eating animals or animal products. Some may care a bit while confronted with very horrific images, but they too go back to their daily life and things are forgotten. Their habits, their money and hunger hormones are acting ahead of their mind and hearts.

It is much more possible for group 2 to become vegan, group 1,  in time. Although many vegans (group 1) say that the painless slaughter in group 3 legitimizes the slaughter of animals and will increase the number of animals killed, it is very difficult for group 1 to get the attention of group 3 with this argument. This group will most likely draw the largest audience from its immediate neighbour, group 2; vegetarians and pescatarians. Group 4, which represents a butcher, a barbecuer , a person who constantly sacrifices, and a conservative person who is very attached to his habits and traditions, is almost impossible to jump here. Most of the people in group 4 don't even know what groups 1 and 2 are, and there is a very broad range of people in group 4 that has not even heard of painless slaughter.

According to our experience,  we have witnessed many times that those in Group 4 that just learned about painless slaughter often become more open minded towards change in the way we handle animals and what we eat. There is now a possibility that they start to sympathize with the neighboring Group No. 3. They feel after all no longer so different and defensive, but rather that they have something in common. It is not too confrontational- their ears and brain are open.

In other words, these people can actually be a gainable mass with these studies. It is a pity that those in Group  1 can never reach the audience in group 4. Group 4 is the majority of people, what a missed chance ! Group 1 think that Group 4 on the far right already knows about all the injustices towards animals and campaigns accordingly. Group 1 even expects Group 4 to jump to Group 1 immediately. But Group 4 needs to also make the steps one at a time, they cannot jump 3 steps all at once. Most of us animal rights activists also did not change overnight, it was a learning process and we changed our diet slowly.

Therefore, my personal stance is to encourage those in their current grouping to the next level in a rational way. This will be the most effective way at changing the majority of people, and making the biggest difference to animals across the spectrum. I already know that we cannot end animal exploitation by telling people what they should do and how they should think. You cannot just say "Go vegan !"  or "Accept painless slaughter !" and expect someone to start thinking that way.

However, campaigns like Meatless Monday, publishing emotional movies with tears in the eyes of cows, showing that animals are sentient and have the same full range of emotions as we do, explaining why painless slaughter does make a huge difference to the level of suffering, defending the Meatless Monday and cage-free egg campaigns, really help the inquisitive audience become open to new ideas and opinions and to move forward on the path of awareness. I know that each person that moves to the next group on their left will prevent thousands of animals from suffering.

It is important that Group 1 does not forget that they were not always in Group 1 and that they try to remember what made them change. It is conter-productive to act morally superior. If we really want to make a difference for animals, we need to attract all people towards a more compassionate future rather than just make our small utopic islands of like-minded people.  We should not ignore the cries of the masses of animals that continue to suffer at the hands of the masses of people that we refused to communicate wisely with. I

The fact that no animal rights defender organization in the world conducts a campaign in this way and that there is no example does not deter me from defending this case in this way.

In this case, the situation of Haytap, which is an important NGO in Turkey,  we target campaigns to people in all four of the groups in the above table, and the energy it spends is not actually a contradiction. It is the work that appeals to all four groups to move them to the next stage, towards more awareness and less animal suffering. Otherwise, it will be extremely difficult to gain new people, to convert the “not yet converted”. We want to make them give up their old ways and open their minds to a new lifestyle, even if it is just one step at a time. By working together and not against each other we will achieve more for the animals on a larger scale, and the change will be permanent, not just a hype.

Besides, there are already animal activits groups that work only  in their focused field. Like vegans make campaign over veganism. Vegaterians for vegeterians. Pescatariens for fish lovers . Cageless   free  campaigners for their own supporters. Even barbecuers for their fans. All of them appeal to their own audience.

Lets assume that one person has become a member of Group 1 . I firmly believe that he/she will also attack even to the auther of this artickle since he has reached nirvana but the authour still did not !

I know that I will receive criticism, even from the people who became aware of animal rights through me and leveled up from one group to the next from what they read or affected .

However, I will not give up my case, even though I know that they will be cyberbully over me as they reached nirvana.13/08/2022

p/s : To read this article in turkish please click here